For most of us, the best we can expect to see through those tiny plastic portholes onboard a passenger plane is a view of meringue-like clouds or a shockingly wobbly wing. So why not get rid of them altogether? Instead, replace them with ultra-thin display screens, integrated with the fuselage or seat backs, that relay camera imagery of the scenery whizzing past. This might be a vertigo sufferer's worst nightmare but we think this exciting emerging technology might just have wings. 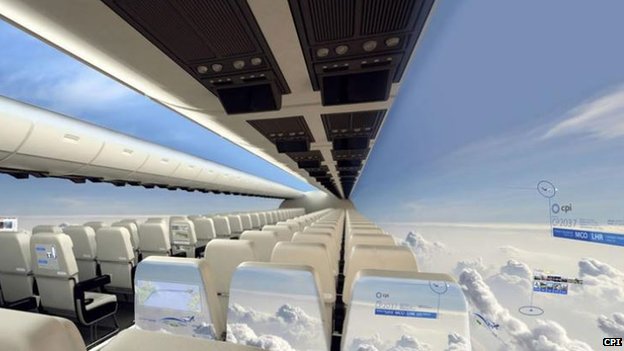 How will it work?

The plane would be fitted with ultra thin, extremely lightweight and flexible OLED displays that can be embedded into fuselage lining panels and seat-back displays.

According to the brains behind the concept at the UK-based Centre for Process Innovation (CPI), a member of the UK’s prestigious High Value Manufacturing Catapult;

Images would be relayed from a series of cameras mounted on the fuselage, potentially giving each display an uninterrupted view of the exterior (avoiding the wings and engines)

These display panels can also be switched up to provide subtle, glowing lighting to mimic sunrise and sunset – thus helping to relieve the dreaded onset of jet lag.

What are the advantages?

The CPI point out that more than 80% of the fully laden weight of a commercial airliner is made up of the aircraft and its fuel. They claim that “for every 1% reduction in weight, the approximate fuel saving is 0.75%.”

Less weight means less fuel. Less fuel means less carbon dioxide emissions and ultimately, you'd expect, lower costs for the carriers, which should then be passed on to the paying public. Sounds good to us.

What are the disadvantages?

A steady (jet)stream of cynicism materialised in the wake of this story. Kane Iyer was among the naysayers to comment on the official CPI site. He said: “Now let's inject a dose of healthy reality into the conversation. In real life, those screens will be used for ads. People will get motion sickness a whole lot more. And airlines will sell seats with 'real windows' at a premium.

“Not to mention the joys of software glitches when the screens go dark - blue screen of death, for all the passengers to see. Yup, a great solution for a problem that never existed, to make flying even more miserable than it already is.” Hmm, it seems it might not be for everyone.

When are we likely to see this take flight?

The CPI predicts that it will take around five years to take these processes into full production, which could mean that we'll be able to snap up these truly unique window seats within a decade.

What do you think? Is this the next step in passenger aviation? Will it bring down costs and improve the flying experience? Or is it likely to herald a new era of in-flight advertising and added sterility? Join in the debate by leaving your comment below.