A guide to The Manufacturer Director’s Conference

The Manufacturer Week of Excellence is nearly upon us and promises three days of top class events in Birmingham from 25-27 November. PIF give you the lowdown on the showpiece event of the week: The Manufacturer Director's Conference (TMDC), which takes place at the International Convention Centre over Wednesday and Thursday of the week. 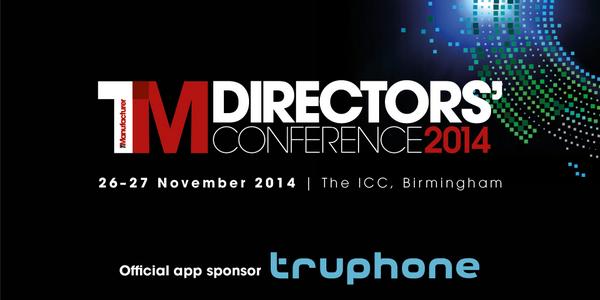 The last five years have proven challenging for manufacturers. A double-dip recession, eurozone crisis, a gaping skills shortage and increasing material costs have all contributed to stuttering growth. However, with green shoots of recovery emerging in the form of upwardly revised GDP and greater output, optimism is surging back into the sector. It's time to forge ahead, by embracing new technologies, encouraging innovation, and building strong partnerships to sustain the economic recovery.

That's the overarching message of the TMDC. The aim is to galvanise the industry, turning the spotlight onto the trailblazers who've driven growth, and motivate delegates to forge ahead with their own upward trajectories. “The TMDC will provide manufacturers with the inspiration needed to drive their company forward in 2015,” they promise.

“As the flagship event The Manufacturer Directors’ Conference (TMDC) will focus on the drive for continued growth in the year ahead, addressing both the opportunity for innovation and investment that this will bring,” according to the official event website.

It's not too late to register for a packed agenda that's set to include industry keynotes, academic insights and government comment. not to mention 'deep dive' debates and discussions, best practice case studies, essential skills workshops and invitation only sector round tables. Discussion topics range from re-shoring to innovation technology and rapid growth secrets from successful SMEs.

The Next Generation Manufacturing Forum sees more than 50 young manufacturers imparting their insights into how they imagine the future of UK manufacturing could pan out over the next decade. While 'The Winners: One Year On' shares the success stories and progression of some of The Manufacturer of the Year Winners from 2013.

This year sees the TMDC go paperless. Instead they've produced a TM Directors' Conference 2014 app for iOS and Android devices, which handily incorporates the full agenda and list of speakers, a venue map and a delegate list to plot your networking activities. There is free Wi-Fi available throughout the venue via the ‘ICC’ network.

As you'd expect from a marquee event of this magnitude the calibre of speakers on show is impressive. Day one's highlights includes an address from Professor Sir Mike Gregory, Head of the Institute for Manufacturing centred around increasing British productivity. While Nick Boles, Minister of State for Skills and Equalities, leads a discussion about future talent.

The ICC is located in the heart of Birmingham city centre. Abundant, secure multi-storey car parking can be found at sister venue, The NIA, just a short walk away (King Edward’s Road, B1 2AA). Birmingham New Street train station, and the smaller Five Ways Station, are also just a short walk from The ICC and are served by taxi ranks. Birmingham New Street has three direct services to London Euston every hour (80 minutes). The airport is eight miles from the city centre and is directly linked to Birmingham International Railway Station via an Airlink Shuttle. Up to nine trains an hour head from there to the city centre

Delegate fees for subscribers of The Manufacturer are £75 for one day, £95 for both days, or £295 with the TM Awards 2014 included. Otherwise, for non-subscribers it's £275/295/495 respectively. Ticket prices do not include VAT. A magazine subscription costs £95 for manufacturing companies.