How green is your Apple? The answer is VERY nowadays

To coincide with the 44th anniversary of Earth Day, Apple reveals its efforts to combat climate change are genuinely bearing fruit.

The tech behemoth posted a YouTube video entitled 'Better' about their environmentally friendly aspirations. In it, CEO Tim Cook's voice over talks about making “changes that will benefit people, as well as the planet.” He talks about Apple's desire to “innovate, improve, to re-invent” with “an even stronger commitment to the environment for the future.”

That means using greener materials, less packaging and striving to keep their products out of landfill. “We have a long way to go and a lot to learn,” Cook admits. “But now, more than ever, we will work to leave the world a better place than when we found it and make the tools that inspire others to do the same.”

Apple will only use renewable energy sources

Apple's ambitious goal is to power all of its corporate offices, stores, and data centres entirely from renewable energy sources. Why? According to the Guardian, “Apple said its carbon footprint in 2013 was 33.8m metric tonnes of greenhouse gas emissions in 2013, or around 5% of the UK's annual CO2 emissions for the same year.” 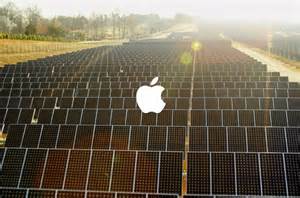 How will Apple manage this?

That's some energy bill. So how do you go about tackling that? Head on in Apple's case and as of last year, a respectable 73 percent of their facilities had been converted to green energy, including 86 percent of their corporate campuses, 120 US stores and 100 percent of their data centres. All that equates to “a 169 percent increase in the use of renewable energy at Apple corporate facilities worldwide,” according to Apple.

The tech firm's Maiden data centre, in North Carolina, was purpose built for maximum energy efficiency and has been awarded the Leadership in Energy and Environmental Design (LEED) Platinum certification from the U.S. Green Building Council. 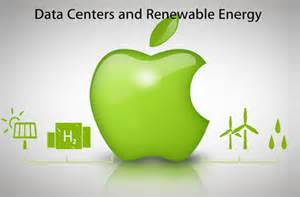 They say, “On any given day, between 60 and 100 % of the renewable energy it uses is generated onsite through biogas fuel cells and two 20 megawatt solar arrays — the nation’s largest privately owned renewable energy installation — and we purchase any remaining power we need from entirely clean sources.”

The centre generates a hefty 167 million kilowatt hours of renewable energy onsite each year, which is thought to be the equivalent of 13,837 homes. Meanwhile, not only will their new Cupertino campus run off 30 percent less energy but it will also harbour 7,000 trees and 20 percent more commuter initiatives (like biofuel buses and more than 300 electric vehicle charging stations).

Previously critical of Apple's environmental record, Greenpeace have commended their efforts. They say on their website, “Apple’s aggressive pursuit of its commitment to power the iCloud with 100% renewable energy has given the company the inside track among the IT sector’s leaders in building a green Internet.

“Apple’s commitment to renewable energy has helped set a new bar for the industry, illustrating in very concrete terms that a 100% renewable internet is within its reach, and providing several models of intervention for other companies that want to build a sustainable Internet.”

Apple claim that their products now use 57 percent less power than they did in 2008 and their stores will now take back those products for recycling free of charge. “So even as we continue to grow faster than the rest of the industry, we’re doing it with products that are friendlier to the environment,” they say. Very commendable indeed; we applaud you Apple.