Contract expected to commence in Q3 2019

Equinor has signed a framework agreement with Rowan Norway Limited, based on terms that will also apply to future rig contracts with the company. The contract with Rowan Stavanger is based on the framework format and gives Equinor exclusive right to use the rig up to 2025 if it is kept in continuous operation. It is expected to commence the third quarter of 2019.

Rowan is a global provider of contract drilling services with a fleet of 25 mobile offshore drilling units, composed of 21 self-elevating jack-up rigs and four ultra-deepwater drillships. Their fleet operates worldwide, including the United States Gulf of Mexico, United Kingdom and Norwegian sectors of the North Sea, the Middle East, the Mediterranean and Trinidad.

The value of the fixed part of the contract is estimated to be worth in the region of $23 million. In addition to drilling services, the rig owner is responsible for casing running, slop treatment and cuttings handling. Equinor and Rowan have also executed a Master Framework Agreement which facilitates future contracts.

“We are pleased to establish an agreement with a rig supplier that is new to us as operator on the Norwegian continental shelf, says Geir Tungesvik, senior vice president for Equinor’s drilling & well cluster. “Rowan is a large worldwide supplier of jack-up rigs. We want to have a long-term cooperation with Rowan and have therefore signed a framework agreement with them,” 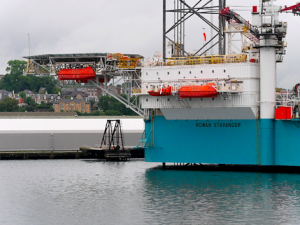 About the Gudrun field

The Gudrun field, operated by Equinor, was first proven in 1975 and is reported to hold around 184 million barrels of oil equivalents. This is a high pressure, high temperature reservoir that requires special technology and Equinor is actively using experience and technology gained from its Kvitebjørn and Kristin developments.

Gudrun is located in the Norwegian sector of the North Sea, about 55 kilometres north of the Sleipner installations. Gudrun is developed with a traditional steel platform resting on the seabed. The platform has capacity for partial treatment of oil and gas before the hydrocarbons are sent via pipeline to Sleipner. Gas is then transported onward to the gas markets from Sleipner A, while the oil is routed together with the Sleipner condensate to Kårstø for shipping.

Our mission is to be recognized by our customers as the most efficient and capable provider of demanding contract drilling services.

01.
How can HPC air compressors reduce your business costs?
02.
Digitalisation & Sensors with Baumer
03.
Why you should invest in A-Lok Parker Fittings
04.
INOXPA mini dairy plants are the cream of the crop
05.
IFM electronic pressure sensors and photoelectric sensors for food and beverage industry
06.
How using an IO-Link interface to digitalise your sensor will enhance process efficiency
07.
New IMI Norgren electronic pressure sensors with IO-Link capability
08.
Food and beverage industry can play major role in addressing health and environmental concerns
09.
Endress+Hauser Liquiphant level sensor now Industry 4.0 ready
10.
Why you should use stainless steel pressure regulators for gas or liquid applications