Skip to content
» Articles » The problem of Air in a pipeline: High points line restrictions and increased velocity

The problem of Air in a pipeline: High points line restrictions and increased velocity

Where does Air in a pipeline come from?

Air can have a big impact on water and waste water systems. The presence of air in a pipeline and its impact on operations is an aspect of the water industry that causes the most confusion.  A lot of problems are blamed on improper installation of a valve but they are actually due to the inability to aerate the valve.  Air in a pipeline comes from three possible sources:

The Problem of Air in a Pipeline

The main problem associated with air is air accumulation, line restriction and increased velocity.  Pockets of air collecting at high points can lead to a line restriction.  They increase headloss, extend pumping cycles and increase energy consumption.  Air collecting at high points in the system means fluid is forced through a smaller space so fluid velocity is increased.  As the air space grows larger two problems may occur. A pressure drop higher than pump capacity can develop and stop all flow.  The air pocket can become dislodged from the high point and pushed downstream.  This causes a huge increase in fluid velocity which is then suddenly stopped by another high point causing a high pressure surge know as a “water slam”.  This is the most serious problem related to air accumulating at high points and can cause serious damage to valves, fittings, gaskets and can even break the line.

In the past engineers have tried using sandpipes to try and expel large amounts of air.  Other techniques include using ball or gate valves to bleed off air at high points, but it is impossible to predict when a high point in a system may need bleeding.  More commonly, open fire hydrants were used in the belief that all of the air will be released.  The problem with this method is that hydrants are connected to the side of a pipe, still leaving some air trapped at high points. 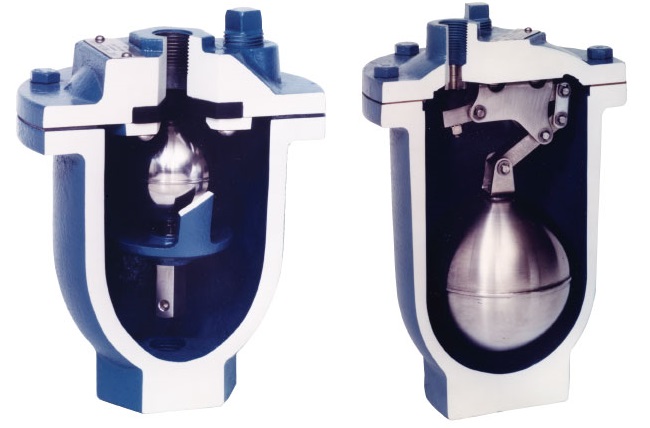 Automatic Air Valves are available in many different designs to suit the wide range of application problems they are needed to solve.  They automatically allow air in and out without the need for an operator.  They come in three basic configurations: Air Release Valves, Air-Vacuum Valves and Combination Air Valves.  It is critical to choose a valve with the correct size and install it at the right location within a system.  It is recommended that air valves are installed every half a mile on straight horizontal pipelines.  Val-Matic also provides Windows-Based software to help choose the correct size and location of a valve for a system.

If you have any questions relating to the Val-Matic Automatic Air Valves, head over to our Solution Centre where you can speak to one of Val-Matic's certified technicians.