Skip to content
» Articles » Pressure Regulator selection – the right one for your application.

Pressure Regulator selection – the right one for your application.

Pressure Regulators are used to provide a constant outlet pressure independent of the inlet pressure or flow. They are generally used for reducing the pressure to the level required for downstream equipment, stabilising the force applied to cylinders or minimising pressure variation. 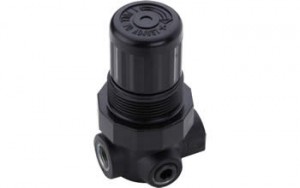 Pressure Regulators can generally be categorised into 3 broad areas:

General Purpose regulators are designed to give the maximum flow capacity, whilst maintaining the outlet pressure at a set level, to a reasonable accuracy. They operate due to a control spring acting on a diaphragm to regulate the air pressure. Outlet pressure is determined by turning the knob clockwise or anti-clockwise to increase or decrease pressure.

General Purpose regulators are available in relieving and non-relieving types.

Pilot Operated regulators are useful in high-flow applications and when access to the main regulator is difficult.

This tutorial was written by PIF technical editors, based on Norgren’s range of Pressure Regulators.