In this article, PIF provides an in-depth explanation about the working cycles of Valsteam’s ADCAM pressure operated pumps. We spoke to BM Engineering to answer some of your most frequently asked questions regarding mechanical pumps, their uses and how they operate. 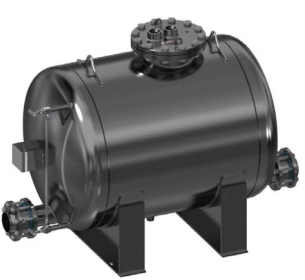 A mechanical pump consists of a body shell, into which condensation flows by gravity. The body contains a float mechanism, which operates a set of changeover valves, allowing the transfer of the liquid to a higher elevation or pressure. The pump can be operated by steam, compressed air or gas and can be used for lifting any kind of non-corrosive liquids.

How the Valsteam Mechanical Pump works

1. Liquid flows by gravity into the pump through an inlet check valve lifting a float.

2. At the upper limit it opens the supply valve, allowing the steam or compressed air to enter in the pump body.

3. The pressure in the pump builds up just enough to overcome back pressure.

4. The pressurised liquid opens the outlet check valve and the discharge starts. (The liquid discharged may be quantified through a special counter, enabling the pump to function as a reliable flow meter).

5. When the float reaches the minimum lower level it closes the steam or compressed air supply valve and opens the vent, allowing the liquid to fill the pump again.

There are different stages to a pressure pump trap’s working cycle. The following six points explain these in greater detail, starting with the ball float mechanism controlling the steam trap valve and finishing with the motive steam valve closing:

1. The ball float mechanism and the motive steam valve start closed, while the exhaust valve is open. The float controls the steam trap valve and the steam motive pressure valve. Condensate starts to flow to the pump trap at the same time.

2. The PPT is operating as a steam trap, modulating the condensate discharge as it is formed. The motive steam valve remains closed and the exhaust valve open.

3. As soon as the equipment control valve starts to modulate, the steam pressure will decrease and consequently the differential pressure starts to be lower, decreasing the PPT steam trap discharge capacity. The condensate level inside the pump is now increasing.

4. If this situation goes on, the condensate shall flood the equipment, causing problems. But by using a PPT at this stage, the snap action pump mechanism will close the exhaust valve and open the steam one, allowing the external motive steam to replace the necessary positive pressure, pumping back the condensate.

6. The motive steam valve closes and the exhaust opens, equalizing the inside pump pressure with the condensate inlet, and thus the condensate flows again to the PPT with enough differential pressure the system re-starts as a steam trap or, otherwise, as a pump.

Understanding the workings of a steam trap

A steam trap is a device used to discharge condensate and non-condensable gases with a negligible consumption or loss of live steam. Most steam traps are nothing more than automatic valves. They open, close or modulate automatically. The three important functions of steam traps are:

Valsteam's thermodynamic DT32 disc steam traps are compact, lightweight and easy to install steam traps. They are excellent for high pressure systems, including steam tracing applications and offer the following features and benefits:

Having initially started in 1982, as a company assembling steam systems, Valsteam ADCA has evolved to a company present in 80 countries with a 22,000 square metre manufacturing facility where all of the products they sell today are produced.