Keeping in with the theme of Steam applications this week, we bring you these useful tips and pointers to always bear in mind when designing or maintaining Steam Heat Exchange Applications. 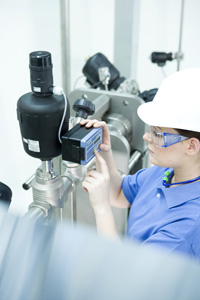 Water hammer is not acceptable and should not be tolerated.

If you hear it, leave the area. Inform the process supervisor. It is the most destructive force on a steam system. It is not a normal situation and should never be tolerated. It can damage equipment and injure or even kill personnel.

Do not oversize control valves.

An oversized control valve is costly, it will find controlling the process difficult and spend prolonged periods in the almost closed position, risking wire-draw and premature failure. Wire-draw is an action where condensate cuts a path through the valve trim, passing steam even when closed.

You must always consider velocities and noise when sizing a control valve.

Sizing a control valve on mass flow and pressure drop alone is not correct. The optimum velocity at the valve outlet should be between 10–40m/s and the noise no greater than 85dB.

Steam valves should be opened and closed with care and slowly.

This allows any build-up of condensate to flow gently to the next drain pocket. It will also reduce the risk of thermal shock. This is especially important during warm up periods.

Install a strainer before a control valve.

Install pressure gauges before and after a control valve.

They provide the information needed to understand the conditions inside the system. A great aid during commissioning and afterwards when operating the steam system.

Condensate produced by a process must be removed.

Condensate holds roughly 5–6 times less energy than saturated steam. If a heat transfer process is flooded with condensate, the results will be poor and you risk water hammer.

Condensate should normally be returned to the boiler feed water tank.

Condensate still holds its specific enthalpy of water with roughly 16 % of the original steam energy still remaining, depending on the pressures. By returning the hot condensate back to the boiler you reduce energy losses, water usage and water treatment chemicals.

A rising condensate line from a process can cause a “stall” condition.

“Stall” conditions are particularly problematic in modulating steam control applications. “Stalling” occurs when the pressure available is not sufficient to force the condensate out of the heat transfer area, resulting in water logging and poor heat transfer performance. An alternative is to allow the condensate to gravity feed into a condensate pumping set.

The information in this article was based on Bürkert Fluid Control Systems Steam Guide for designing heat exchange applications.