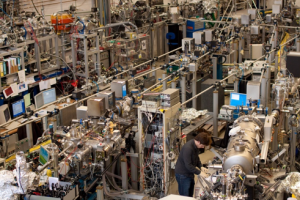 What is the European XFEL?

When the European XFEL in Hamburg is completed in 2017, it will reputedly open up completely new avenues of research for scientists around the world. This state-of-the-art research centre will generate 27,000 ultra-short X-ray flashes per second, with a brilliance a billion times higher than that of the best conventional X-ray radiation sources.

European XFEL's "X-Ray Optics & Beam Transport" team is responsible for the transportation and manipulation of the X-ray beams in a 900m long section where the X-ray light is transported through evacuated tubes that require a vacuum pressure of less than 1x10-6 mbar. Vacuum valves, sliders, motors for positioning mirrors, monitoring engine coolant and compressed air as well as other components are coordinated by controls. 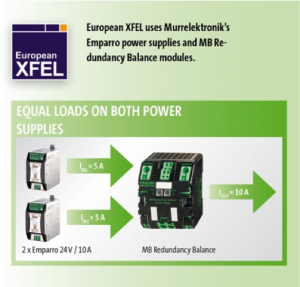 Murrelektronik's Emparro Power Supply Units are used for the 24V supply of the controls that are located in cabinets along the tube, as well as for the other components on-site. "There is a very practical reason for this," explains Timo Korsch, physics engineer at European XFEL. "The control cabinets in the tunnel are only 1.2m high. Therefore, they require very simple wiring.

“Emparro Power Supply Units make this possible: they are connected with spring clamp terminals." The terminals are designed using push-in technology so connection wires can be mounted in the front without using tools. The contacts are permanent and never need re-tightening.

Thanks to their efficiency rating of up to 95%, Emparro power supplies only lose a small amount of energy. This means they don't dissipate much heat. "Less heat dissipation means less cooling is required in the air-conditioned control cabinets which saves energy and lowers costs", explains Timo Korsch.

In the future, researchers from all over the world will use the tunnel to conduct experiments. As a result, it is very important that the facility work without interruption in order to maximize the amount of time available for research and experimentation. Access to the tunnels is blocked by a control system while the facility is operating so they can only be entered for troubleshooting during scheduled maintenance times.

As a result, the power supply is designed with redundancy. Two Power Supply Units each are operated with different phases. They are decoupled by a MB Redundancy Balance module that ensures equal loads on both Power Supply Units. As a result the life of the units increases significantly and, as Timo Korsch explains, "If one of the power supplies should fail, operations can continue until the next scheduled maintenance day.”

Both Emparro and MB redundancy modules feature signal contacts, which is an additional benefit for the maintenance of the facility and “provides the possibility of remote diagnostics", says Korsch. In other words, in the event of a drop in voltage, this information can be read directly and acted upon quickly.