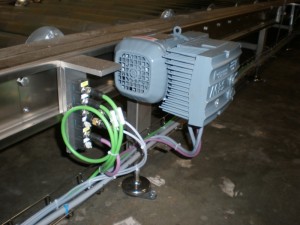 A major food producer required a 200m pallet conveyor system, with a conveyor capacity of up to 80 pallets per hour, and 90m of this system would be situated in a cooling tunnel*. In total the system covered a very long distance, so the decision had to be made whether to use conventional technology or choose a bus system.

The conventional method meant having a frequency converter in the cabinet and wiring the drives with very long cables routed from the cabinet to the drives. However, with 120 drives controlling the speed of the conveyor line, it was an obvious choice to opt for Murrelektronik’s Cube67 RS232/485 fieldbus modules.

The decision to install a Profibus solution was made very quickly since a space-saving solution was required for controlling the drives. Because of their compact design, Cube 67 modules can be easily protected from damage with simple means, like stable edge protectors. Another prerequisite for the application in the cooling tunnel was being IP66 compliant. Cube67 modules, with their IP67 rating, meet these requirements.

Cube67 modules* feature four digital I/O ports, which connect to light barriers that detect the position of the pallets, and the target temperature is selected by a preset time. There are two conveyor racks in the cooling tunnel: the left track has two pallets moving as a set, while the right track is designed as an ‘express track’. The destination and other data required for the transport are stored in the system’s control software. 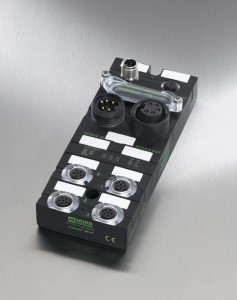 Five months after the project start, Murrelektronik suppliers, PCA, were able to set up and test the conveyor system in their own production hall and demonstrate its capabilities to the customer. Four months after the demonstration, the system was shipped, assembled at the food manufacturer’s site and put into operation.

The assembly and set-up time took about four weeks, and the complete electrical set-up at the customer’s site took one week. Such a short time for such a complex system with a lot of data handling was possible because of Murrelektronik’s preliminary work. Thanks to the plug connection technology we were very fast. All we had to do was install the connection cables, everything else was ready. As the drive was pre-wired, we only had to connect the Cube67+ bus node with pre-wired cables to ensure faultless wiring.

For further information about Cube 67, and other products and services, please visit Murrelektronik’s author profile.

01.
Ask the Experts – How do I choose a pneumatic actuator?
02.
A guide to temperature sensors for hygienic applications
03.
What kinds of applications require a steam trap?
04.
Comprehensive process safety with inductive IO-Link sensors
05.
The benefits of monitoring important water parameters on one platform
06.
Going to new limits with the Baumer Ultrasonic sensor range
07.
The use of sensors for hygienic and washdown environments within the Pharmaceutical market
08.
Glaston’s compressed air systems used in a Lab Analysis Environment
09.
Three common mistakes in instrumentation sensor selection
10.
Bürkert embraces Industry 4.0 with intelligent Efficient Device Integration Platform