As part of a continuous improvement programme, Severn Trent Water identifies and replaces equipment that has reached the end of its service life. A recent project in South Yorkshire involved the replacement of four Archimedes screwpumps that had achieved over 30 years in service.

The contract was delivered by ECS Engineering Services as a turnkey solution for the tier 1 contractor, NMCNomenca. ECS won the competitive tender to complete the refurbishment of four Archimedes screwpumps at the Severn Trent Water sewage treatment works in Warmsworth near Doncaster. 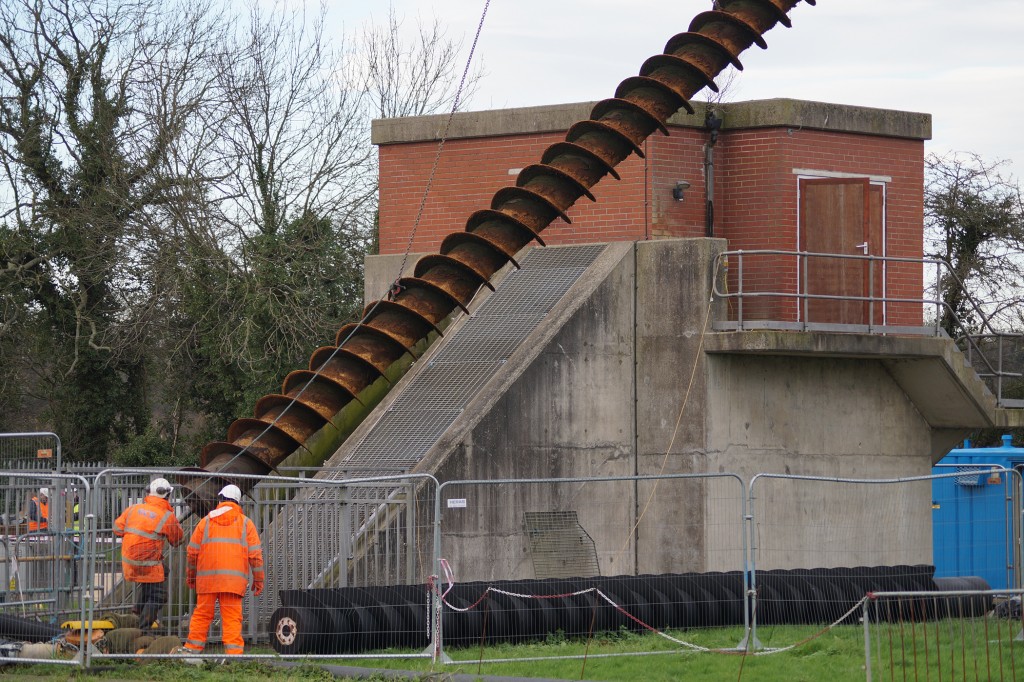 The original screws were manufactured by Landustrie over 30 years ago and had exceeded their service life. Screwpumps are often used in the wastewater industry, especially when dealing with water that may be contaminated with debris that would otherwise cause severe damage to a centrifugal pump. Essentially, they are a very efficient pumping method for low head applications and are used to move water over a short distance on a continuous basis.

The Warmsworth site has two pumping stations that use Archimedes screws, which operate on a duty / standby basis. The inlet screws lift unscreened, raw sewage and the humus screws pump the treated liquor to the filter beds. Each station has two screws measuring 800mm in diameter, 12 metres in length and weighing approximately 1,500 kg.

Removing and replacing the screwpumps

ECS site engineers have many years’ experience in maintaining and replacing screwpumps and the company is also the sole UK distributor for Landustrie screwpump products. These two attributes combined to produce a very efficient solution that could be delivered with minimal disruption to the site.
The works involved the removal of the old screws, motors and gearboxes to allow new equipment to be installed. This included higher efficiency motors, gearboxes and bearings, including the sealed-for-life bottom bearings. The stainless steel bottom bearing is manufactured and supplied by Landustrie, which also provides a three year warranty as standard.

In this case the project was tackled in four stages, removing and replacing one screwpump at a time so as to maintain functional operation of the works. Once the flow to the screwpump had been isolated so that it did not pose a hazard to the engineers involved in the project, the task of disconnecting and removing the screw could begin.

In order to maintain operation during periods of high flow it was necessary to install over-pumping facilities to provide additional capacity that would normally have been accommodated by the screwpump being replaced.

Once the screw had been removed the screed was broken out and removed. Following that, each new screwpump was installed with new bearings and drive system. While the latter will have a significant improvement on the energy consumption of the new screw pump, the bearings can also reduce maintenance costs.

The Landustrie stainless steel, eco bearing is sealed for life and requires no annual maintenance. The design of the bearing allows for 3-dimensional self alignment, which absorbs the expansion and contraction of the screw in changing temperatures.

With the screw correctly positioned, the new screed was installed by hand, which is labour intensive but the only way of ensuring optimum efficiency. The new screwpumps have a temporary screed bar attached to the flights that ensures the gap between the concrete and the screw flights is maintained at 5mm. Once the screed has been completed, the screw is turned slowly to create the ideal gap along the complete length of the screw.

Dave Bennion, Project Manager for ECS, commented: “Since the original screws had been manufactured by Landustrie, the basic design could be obtained from the original drawings and this would be developed further using more modern engineering design techniques, such as finite element analysis. This numerical analysis is especially important for longer screws to ensure that there is sufficient strength in the main body of the screw.”

Once the screws were delivered to site, the actual installation process has been relatively straightforward, with the exception of the weather, which has caused a few minor delays. We need a few days with low wind speeds while we remove and install the screws with the mobile crane and a few days without rain to allow the new screed to be installed.

With over 20 years of experience working with utilities and the Environment Agency, ECS has a proven track record of delivering engineering solutions to a very high standard, with the capability and resources to design and install bespoke equipment anywhere in the UK. The ECS Water Control Division and its team of field service engineers can offer a full turn-key installation, through to maintenance and repair services to all Archimedes screw pump installations from any manufacturer across the UK.

This is custom heading element

This is custom heading element