Nissan was able was able to drive up efficiency and reliability at its Sunderland plant thanks to an electronic control solution from Bürkert that replaced manually adjusted flow control valves. In this article, PIF takes a behind the scenes look at how they achieved this success. 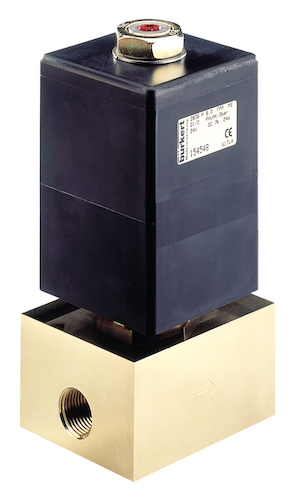 Every year, more than half a million cars roll off the assembly line at Nissan Sunderland. Two parallel assembly lines manufacture a variety of models that require the engine plant to synchronise with the car production lines. The engine line has to change model production on a regular basis. It is supplied by the engine casting plant, which uses several different production processes to produce three different petrol engine models.

Design engineers from Bürkert assessed the requirements of a new cooling system and the current control infrastructure. They suggested installing the Type 2836 proportional valve, which would be controlled through the Type 8605 pulse-width modulated (PWM) controller. The engine component cooling process is controlled by a PLC that uses a proportional-integral-derivative (PID) controller to precisely set and monitor the flow rates of the cooling system.

The Type 2836 solenoid control valve is a direct acting valve which can be made from brass or stainless steel, depending on the application. Capable of handling pressures up to 25 bar and available with a range of orifice and port connection sizes, the Type 2836 can be designed to meet a wide range of requirements.

The PWM controller can either be combined with the valve itself, or, as in this case, mounted in a separate enclosure and connected to the valve by a control wire. This range of options is designed to ensure that different environments and control arrangements can be accommodated. The input signal can be configured from a range of options including 0-20mA, 0-5V, 0-10V or 4-20mA as in this case.

The completed design has greatly improved the accuracy of the flow control system as well as significantly reducing the time taken to change the various settings to prepare for the next engine type. In doing so, the facility for applying even tighter quality control parameters has been added and the total efficiency of the engine casting line has been improved.