Located 140 kilometres west of Shetland in a water depth of 475 metres, Alligin forms part of the Greater Schiehallion Area. The development will consist of two wells, which will be tied-back into the existing Schiehallion and Loyal subsea infrastructure, utilising the processing and export facilities of the Glen Lyon floating, production storage, offload (FPSO) vessel.

Expected to come on stream in 2020, the Alligin development will include new subsea infrastructure, consisting of gas lift and water injection pipeline systems, and a new controls umbilical. The wells will be drilled by the Deepsea Aberdeen rig. It is part of a series of infrastructure-led subsea tie-back developments in the North Sea looking to access new production from fields located near to established producing infrastructure.

BP North Sea regional president Ariel Flores said: “We announced our intention to develop Alligin in April and six months later we have achieved regulatory approval. Always maintaining our focus on safety, we are modernising and transforming how we work in the North Sea to fully realise the potential of our portfolio.

“Alligin is part of our advantaged oil story, rescuing stranded reserves and tying them back into existing infrastructure. Developments like this have shorter project cycles, allowing us to bring on new production quicker. These subsea tiebacks complement our major start-ups and underpin BP’s commitment to the North Sea.”

Brenda Wyllie, West of Shetland and Northern North Sea area manager at the Oil and Gas Authority (OGA), added: “The Oil and Gas Authority is pleased to consent to the development of the Alligin field. This fast-tracked project will maximise economic recovery through utilising capacity in the Glen Lyon FPSO and is a good example of the competitive advantage available to operators from the extensive infrastructure installed in the UKCS.” 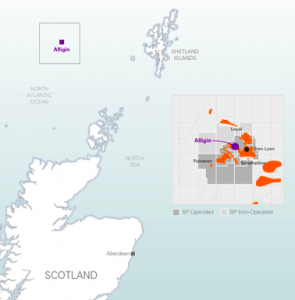 BP’s commitment to the North Sea

BP also has 32% stake in the North Sea Culzean development, which is expected to supply around 5% of UK gas requirements. First gas is anticipated in 2019. Earlier this year, BP was awarded seven licences, five as operator and two as partner, in the North Sea’s 30th Offshore Licensing Round.

The energy we produce serves to power economic growth and lift people out of poverty. The way heat, light and mobility are delivered is changing. We aim to anchor our business in these changing patterns of demand, rather than in the quest for supply. We have a real contribution to make to the world’s ambition of a low carbon future